The following guidelines and flowchart are from: 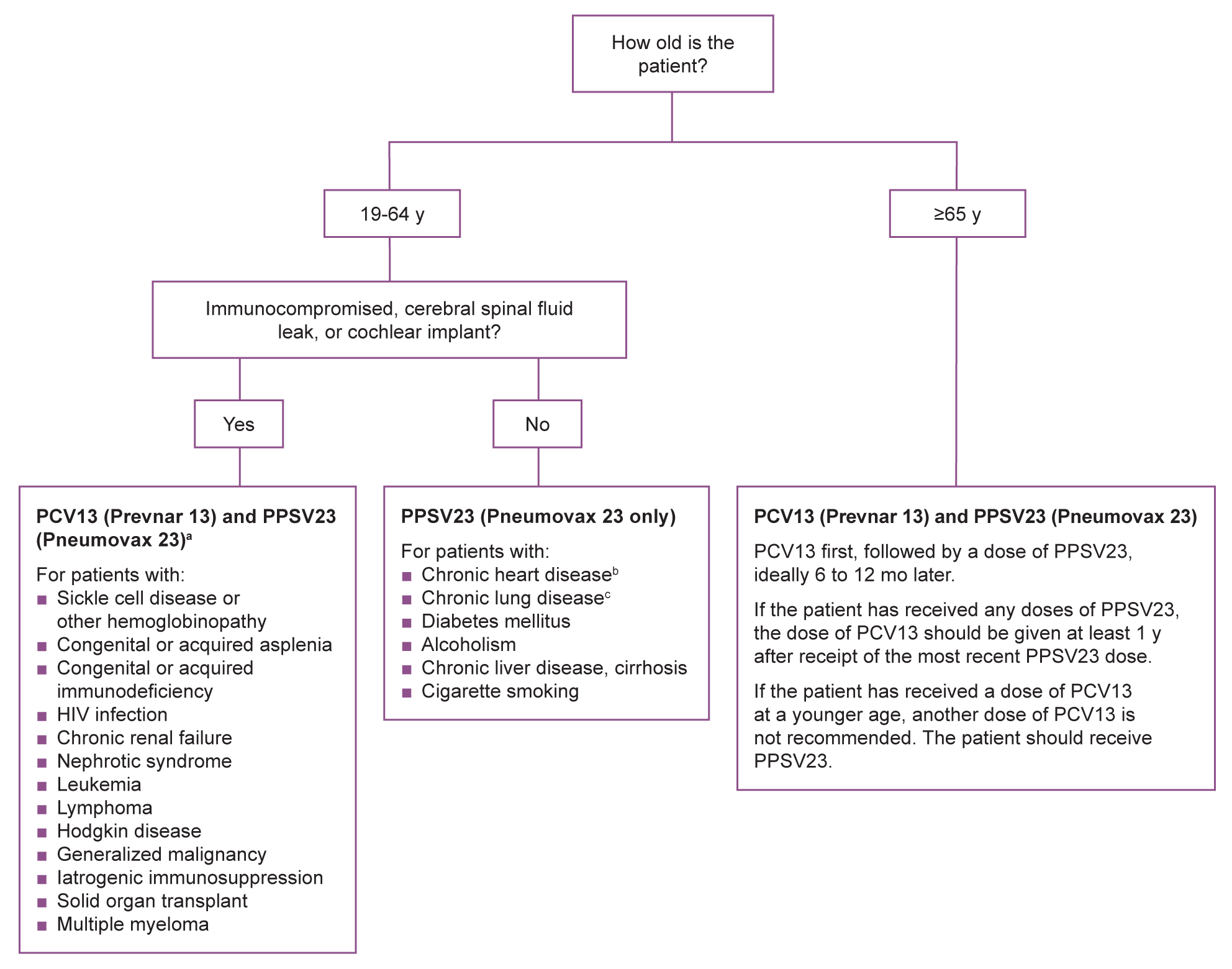 From the CDC’s Pink Book:

Streptococcus pneumoniae bacteria are lancet-shaped, gram-positive, facultative anaerobic organisms. They are typically observed in pairs (diplococci) but may also occur singularly or in short chains. Some pneumococci are encapsulated, their surfaces composed of complex polysaccharides. Encapsulated organisms are pathogenic for humans and experimental animals, whereas organisms without capsular polysaccharides are not. Most S. pneumoniae serotypes have been shown to cause serious disease, but only a few serotypes produce the majority of pneumococcal infections. The 10 most common serotypes are estimated to account for about 62% of invasive disease worldwide. The ranking and serotype prevalence differ by patient age group and geographic area. In the United States, the seven most common serotypes isolated from blood or cerebrospinal fluid (CSF) of children younger than 6 years of age account for 80% of infections. These seven serotypes account for only about 50% of isolates from older children and adults.

The major clinical syndromes of pneumococcal disease are pneumonia, bacteremia, and meningitis. Pneumococcal pneumonia is the most common clinical presentation of pneumococcal disease among adults. The incubation period of pneumococcal pneumonia is short, about 1 to 3 days. Symptoms generally include an abrupt onset of fever and chills or rigors. Classically there is a single rigor, and repeated shaking chills are uncommon. Other common symptoms include pleuritic chest pain, cough productive of mucopurulent, rusty sputum, dyspnea (shortness of breath), tachypnea (rapid breathing), hypoxia (poor oxygenation), tachycardia (rapid heart rate), malaise, and weakness. Nausea, vomiting, and headaches occur less frequently.

Approximately 400,000 hospitalizations from pneumococcal pneumonia are estimated to occur annually in the United States. Pneumococci account for up to 36% of adult community-acquired pneumonia.

Adults with certain medical conditions are at highest risk for invasive pneumococcal disease : immunocompromising conditions, either from disease or drugs, functional or anatomic asplenia, and renal disease. Other conditions that increase the risk of invasive pneumococcal disease include chronic heart disease, pulmonary disease (including asthma in adults), liver disease, smoking cigarettes (in adults) CSF leak, and having a cochlear implant.